Common Unity’s roots are deeply set in its community in the Hutt Valley, 25 km north of Wellington. In 2018, Organic NZ magazine visited and marvelled at everything this not-for-profit organisation was achieving: growing and distributing food, sharing knowledge and building its own solutions to the challenges faced in its community. Rachel Rose takes another look at what’s happening now. 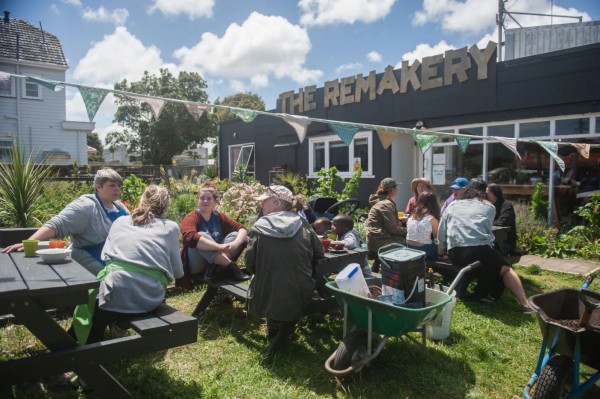 Taking a break at the gardening workshop

Three years on, the vibe at The ReMakery, Common Unity’s base, is familiar: busy, cheerful, lots of laughter and industry. Covid lockdowns however catalysed some far-reaching changes. And lots more is on the horizon, because a stunning documentary – Together We Grow – by Happen Films is about to be released, and Common Unity and its remarkable people are on the verge of becoming world famous (not just in New Zealand).

The Common Unity team is also hard at work documenting their programmes and developing an online toolkit to support people in other centres to create their own food hubs based on the Common Unity ethos and model.

Common Unity’s roots began by creating a farm and nurturing little farmers at Epuni Primary School nine years ago. Its various projects produce tonnes of food and distribute many more to families who experience hunger. But the heart of Common Unity, its kaupapa, is growing community. It’s as much a learning centre as a food hub.

Together We Grow tells the story of Common Unity but also shares an intimate glimpse into the lives of staff and volunteers. The filmmakers take us into Julia’s home and we hear about her experiences as a child of a prison worker, being a solo mum and surviving cancer. Those experiences shaped her and the vision and values of Common Unity. It’s a powerful story and a deeply moving film. 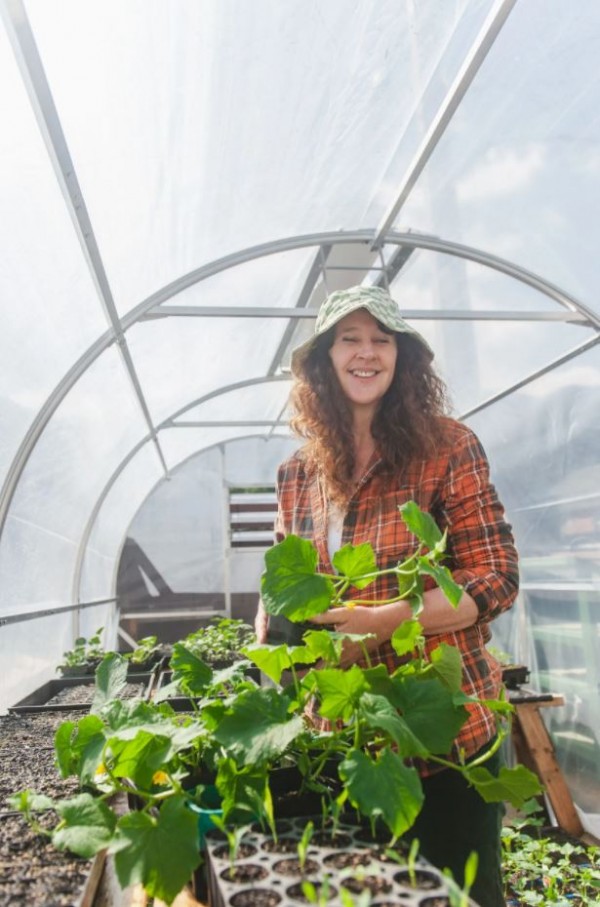 Julia Milne in the greenhouse

Cooking for the community

Covid-19 is very much to the fore: the film was mostly shot at the end of 2020 and is full of reflection on how Common Unity had to pivot to meet the needs of its community. During the first Level 4 lockdown in March–April that year all Common Unity’s programmes had to close.

“We heard that most of the food banks were closing. Our phone began to ring. We got an exemption to open our kitchen and took on the database of our local food bank and began to cook and deliver the meals ourselves. Then we realised that the need far outstripped what we were able to do,” says Julia.

Common Unity’s response was true to form: flexible, fast, effective and all about working together. The next collaboration was with nearby Kōkiri Marae, which already had a distribution network and connection to local families. Together, people in these two organisations began putting out 2000 meals a week.

Unexpectedly, Julia says, “Covid was just gold to us, in terms of understanding more about what we do and [are]”. Teresea Olsen, general manager of health and social services at Kōkiri Marae also features in Together We Grow, and she explains what happened.

“Families in need will tell you what you need to know but when you drop food off at their houses – we saw 22 people living in a two-bedroom house, we saw people coming out of the garage. They had nothing to hide, we were [bringing] food, that’s all we were doing for them. We weren’t asking any questions, why is this big family living in this small house? There were no barriers… We don’t need to know anything else about them, it’s enough that they’re hungry.”

The Hutt Valley Emergency Kai Collective arose out of the Covid response, networking five food banks and providers that span the entire Hutt Valley and Wainuiomata. Initially intended to be a nimble response to lockdown, the need uncovered means it is still operating.

The ReMakery is a sprawling old plaster factory that has housed Common Unity for years. There were 10 staff when the film crew were there; now it’s 22, mostly part-time. For some, like Rochelle, volunteering at Common Unity to develop the café has been a path to skills, employment and a new kind of life.

The café is humming, benefitting from the commercial kitchen in a converted shipping container outside, now managed by Julia’s son Izaak, who’s a chef. He returned from Auckland when the fine dining restaurant he worked at closed because of lockdown. 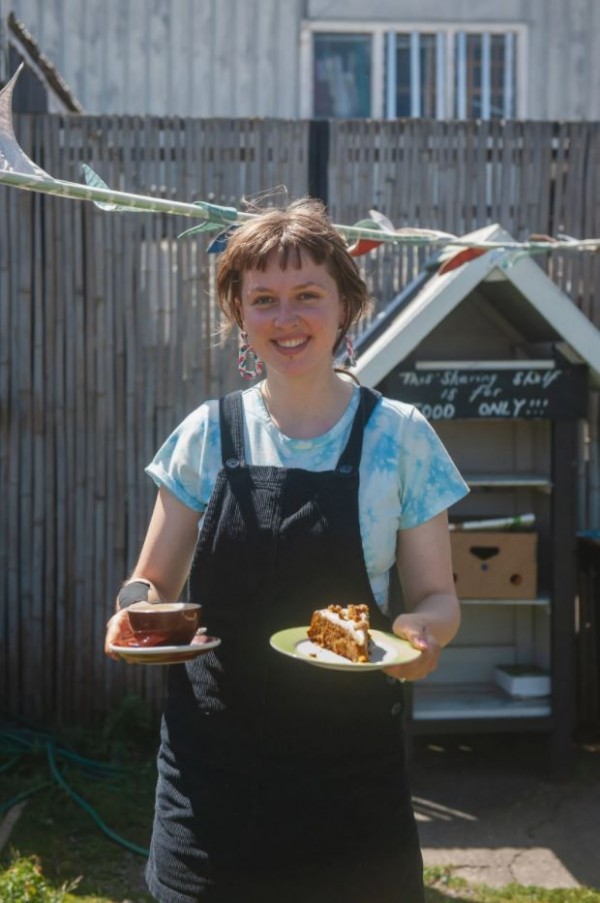 Rose serves up coffee and cake at The ReMakery

Others thrive as volunteers. The film introduces us to Kino, who volunteers in the kitchen and has found the company and activity to be powerfully healing. Roy is another, and he’s delighted to show me the tunnel houses that have sprung up in the back carpark. He’s growing thousands of seedlings for the many food gardens managed or supported by the Urban Kai project.

Roy started his horticulture apprenticeship up the road when he was just 16. He’s 81 now and first arrived at Common Unity when he stomped in to upbraid Julia about not spraying the weeds out front to keep things tidy.

Roy mutters about the young women running the food gardens (‘the bosses’) and calls Julia ‘the dragon’ but it’s well evident he adores all of them. He’s resigned to leaving the glyphosate at home but still resents the weeds at the margins. Roy works at Common Unity most days, where his deep experience is valued, he’s making a difference and he’s surrounded by warmth and company.

Here, growing food is inseparable from nurturing people. It’s a lovely example of how Common Unity makes room and makes friends with people from diverse backgrounds and viewpoints, creating a whole much greater than its parts. 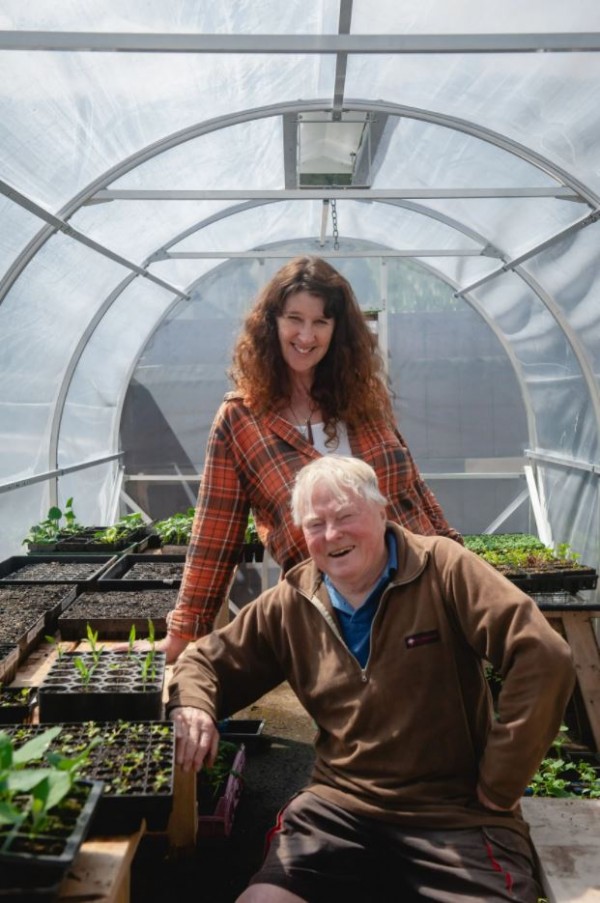 Julia and Roy with seedlings in the greenhouse

Expansion on the horizon

The ReMakery is no longer big enough. The site is one of the few remaining large pieces of land in the area and developers are eyeing it up, but Julia has ambitious plans of her own for how Common Unity can connect and empower more people.

Social housing is densifying here and hundreds more vulnerable residents will arrive over the next two years. A much bigger food hub is required. That needs four key components: a food co-operative run by and for the community, a commercial kitchen, a food distribution hub and education on growing and preparing food.

Long established, successful projects like the sewing collective and bike recycling project have a place too.

“If you want people to grow carrots, you need to start with knitting. Not everyone wants to grow the carrots but we want the community to come and do things together so we have conversations together. All that other stuff around the periphery is important: not everyone is the carrot grower but everyone has a contribution,” says Julia.

Julia is passionate about the quality of that food. ‘Organic’ isn’t a word in constant use here, but it’s baked into the approaches used to grow food. Their kitchen has produced 120,000 meals in the past few years. Currently, Common Unity is co-producing 450 kai parcels every week, each able to feed a family of four.

“We have families living on food parcels now. Ours are filled with the best quality fruit and veges, meal kits, recipes. We’re spending $2000 a week to buy fresh food because we can’t grow enough. And we’re only half of the food banks that exist [here].”

During lockdown, Common Unity focused on creating ready-to-eat meals for people who were homeless or living in transitional housing (including motels), where cooking for themselves was somewhere between impractical to impossible.

The nourishment those meals offered has an ongoing impact. A homeless mother in a motel over lockdown so valued that food that now she’s in a house in the area, she found Common Unity and signed up for gardening courses.

However, the organisation has pulled out of the government’s healthy school lunch programme, frustrated by the bureaucratic obstacles. If only that funding had been delivered into building community capacity to become more resilient, rather than focusing on filling tummies as being the problem. Hungry children are not the problem – our broken food system is. 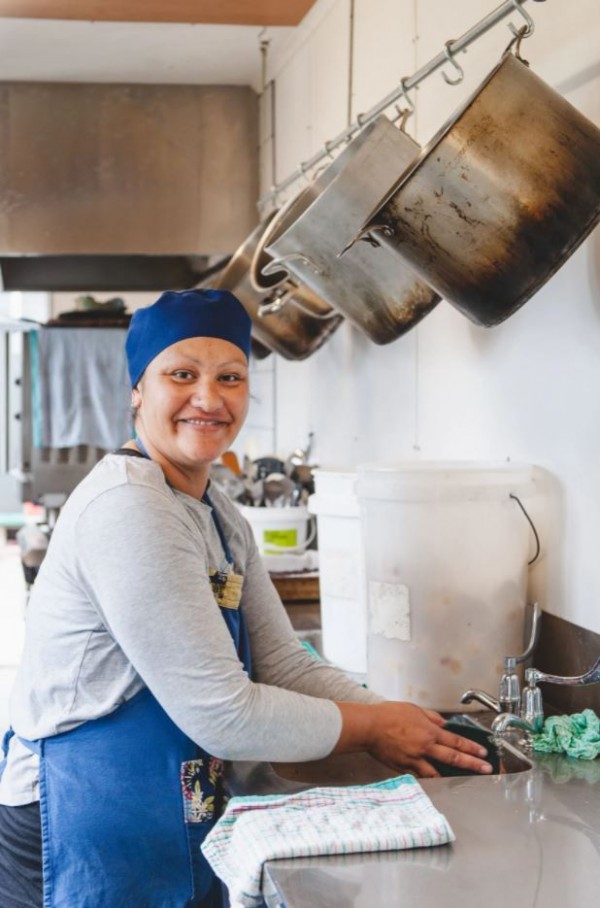 Bonnie in the kitchen

Getting their commercial kitchen certified was reasonably easy, because there’s a clear process to work through. But the regulations haven’t considered a multi-faceted operation that isn’t driven by profit. There’s one set of regulations for preparing food and another for growing it and different branches of government oversee each. A food consultant has been brought in to help and Common Unity is designing a community-based food control plan and will make it freely available as part of its Online Toolkit. That way other community organisations can benefit.

“It would be much easier to run the kitchen by purchasing all the produce from [a supermarket] but what system would we be strengthening?

“Imagine where we’d be without the challenge of bureaucracy. Every time we bump into another thing that gets in the way, it’s another reason why the children go hungry in our village. Each obstacle means the outcome is that people have less access to good food. And that is so wrong. It’s infuriating but it puts fire in your belly,” says Julia.

During lockdown, Common Unity made ready-to-eat meals for people who were homeless or living in transitional housing.

Meanwhile, national chains like Subway have contracts to deliver school lunches, despite a sugar content so high that an Irish court ruled its rolls were cake, not bread.

A deeper issue according to Julia is the lack of agreement and measurement of food security at a policy level. At schools Common Unity has worked with, sometimes only a small number of children arrive with no lunch at all. They are the officially hungry that the school records, but it’s the tip of an iceberg. The majority of children are turning up with a bag of chippies or some biscuits says Julia, but this isn’t recorded. There’s no mechanism for measuring whether a child has enough food, or if it’s nutritious. 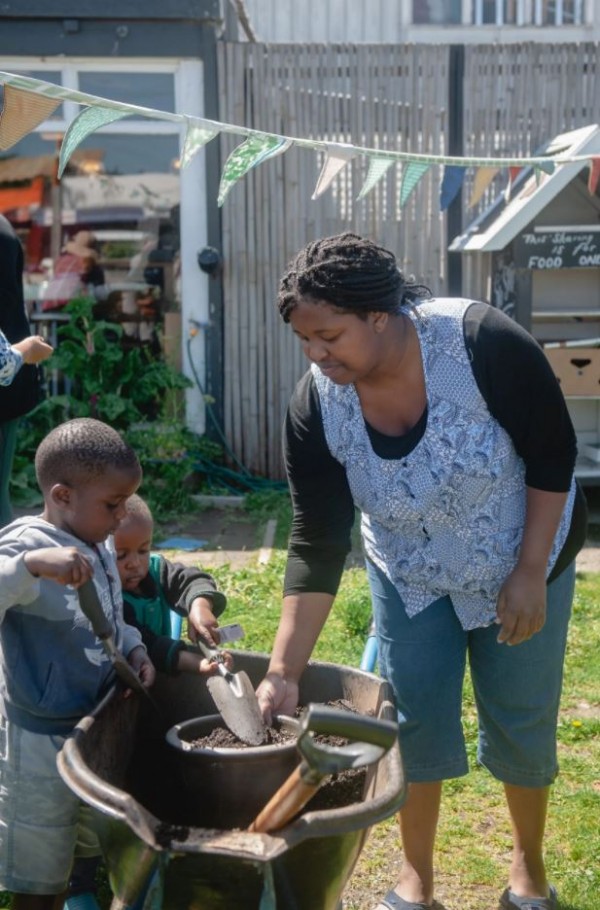 Common Unity is rooted in its place: this is a community of people solving their own problems. They are working hard to document what they have learned and how to share it, so that people in other places can get a head start.

It’s led to the Online Toolkit, a self-guided programme to help people design appropriate responses to the food security challenges in their neighbourhood. Working through the online modules at their own pace, people will be guided to prepare a business plan and other documentation that will help them get underway. There are four modules: the café, the food co-op, the kitchen and urban kai (food gardens).

The toolkit will be hosted on an educational platform but accessed via Common Unity’s website. The team is keen to understand who is accessing it and from where, so they can connect up individuals in the same rohe.

Already of course, people have come to Common Unity to gather ideas and processes to take home. But not everyone can travel, especially now as New Zealanders learn to live with Covid-19 in the community. The filmmakers are promising regular online streams of the film accompanied by Q&As with Julia. Instead of physically touring with the film, funding has been redeployed so Julia and company can accept invitations to regions where people aim to set up similar initiatives. 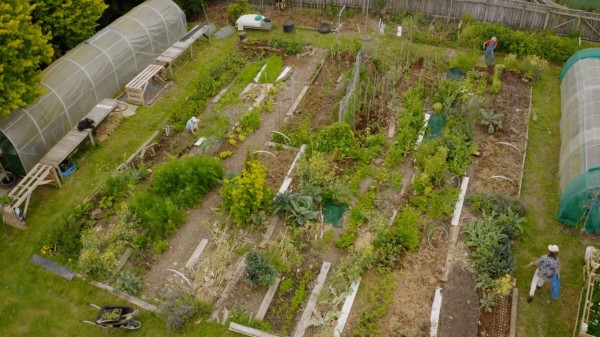 Aerial shot of the farm at Common Unity

Written by Rachel Rose. Rachel is a Whanganui forester who grew up near Epuni.
Photography by Kristi Scott.