Mamia’s all started when Yeshi Taye was cooking her mother’s Ethiopian sauce for a friend who enjoyed it so much they suggested she consider selling it. In mid 2014, Yeshi set up her first stall at Wellington’s weekly Thorndon Farmers with 50 jars of sauce. Mamia’s sauce was such a hit that a month later it was on shelves in Commonsense stores! In 2021, Mamia’s is now sold in stores across Aotearoa New Zealand has won numerous food awards. 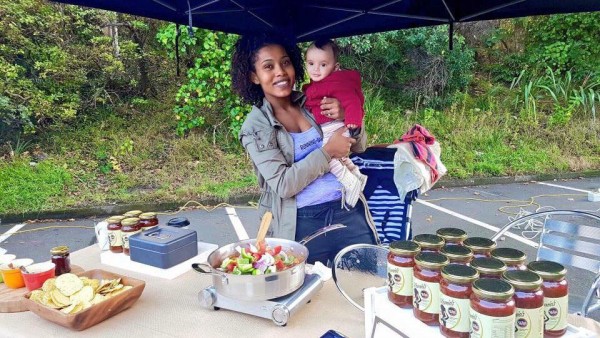 Mamia meaning “Mother” in Ethiopian, was inspired by the loss of Yeshi’s mother, Almaz, who passed away shortly after their family arrived in Aotearoa as refugees from Sudan when Yeshi was 11 years old.

“When you look around there's a lot of cultures present in New Zealand, on supermarket shelves or in restaurants, but I think that Ethiopian culture is under represented. I love Ethiopian food and I wanted to share it here, but I didn't know how until a friend suggested I start making the sauces.” Yeshi Taye.

Mamia’s is an extremely versatile and simple sauce to use. Descripted as ‘Ethiopian wat sauce’, this savoury sauce can easily be added to curries and stir-fries as well as bolognaise, nachos, or even spread onto burgers and sandwiches. Yeshi says it also tastes good on its own as a chutney!. Everything in this delicious sauce has been chopped, seasoned and lovingly made by Yeshi herself.

Check out the Mamia’s website for tonnes of great recipe ideas!