November 7th 2016 will be Commonsense Organics' 25th birthday. We’re going to be celebrating with colourful decorations in store, a big birthday bash, and a month of amazing specials and giveaways. But we also wanted to mark the occasion with something extraordinary. Not only as a nod to our staff, customers, suppliers and wider community, but also to show our love and respect for our founders and executive directors, Marion Wood and Jim Kebbell.

What’s more special, we thought, than creating a chocolate bar in their image? What's a better way to celebrate than immortalizing your founders on a bar of chocolate?

An idea under wraps

The seeds (or beans, really) were planted late last year, when Jo Morrison, manager of our Wellington City store, learnt that we would turn 25 in 2016.

“It stayed in my mind,” Jo says. “I knew Wellington Chocolate Factory had collaborated with other businesses, and we have a really good relationship with them. They’re a great local company and their chocolate is one of Marion’s favourites.”

Jo met with Rochelle Harrison, co-founder of Wellington Chocolate Factory (WCF), in October 2015. Rochelle was immediately enthusiastic, and together they began secretly scheming to make this idea a reality.

WCF co-founder Gabe Davidson describes why they were keen to collaborate with us,"We feel that the team at Commonsense share our values," he says.  "It was an honour to have been asked to become a part of such an important milestone." The first batch of our Commonsense birthday bars ... delicious!

How to build a chocolate bar

WCF makes a delicious range of organic ethically traded chocolate from bean to bar. This means that they carry out every step of the chocolate-making process, from roasting and grinding the beans onwards. We were convinced of the quality and creativity of their products, but wondered what flavour combination we could use for our bar. We wanted something uniquely Commonsense.

By this stage, Lucy Kebbell, Corporate Services Manager and Jim and Marion’s daughter, had taken over the project management on our end. While the original idea had been to use organic strawberries from Common Property (Marion and Jim's organic farm in Te Horo), things just weren't going to plan.

“The strawberries weren’t working,” Lucy says. “We were running out of time, and so we decided go for plain chocolate.”

Then, at the last minute, WCF swooped in with a brand new and unique flavour: cacao nibs and sea salt.

Gabe from WCF says, "We like the fact that the back is covered in Fairtrade organic nibs so you can see where the chocolate comes from: the bean! It brings a nice focus to the raw ingredients."

The flavour combination was an instant winner. “We loved it!” says Lucy. “It looked so festive, like organic confetti!” Better than a golden ticket

Local artist Gina Kiel from Inject Design was the natural choice for creating the beautiful packaging for our birthday bar. Gina has created the artwork for many Wellington Chocolate Factory bars and has done a wonderful job on this one.

The choice of native birds expresses something right at the heart of Commonsense Organics: how organic farming supports our natural environment. All the shelter belts at Common Property are planted up with natives.  “As soon as that happened, the birds came!” Lucy says. “Kereru, tui, piwakawaka and bellbirds. They were a natural form of pest control.”

And the bar's beauty is more than skin deep. When you open the bar, you’ll notice that the inside of the wrapper tells the Commonsense story, framed by photos of Jim, Marion, the family, and staff past and present.

Jo, the instigator of the birthday bar, was thrilled at the final result. “I was so stoked with how it’s come out,” she says. “It’s beautiful! The content is warm and honest.”

Lucy agrees. “I was so overwhelmingly delighted,” she says. “I nearly cried.”

Marion & Jim's reactions on being presented with the bars by Wellington City Store Manager, Jo Morrison.

It was imperative that Jim and Marion didn’t find out about the bar until the big reveal as they never would allowed us to have made such a fuss of them. So, while honesty and authenticity are the bedrock of Commonsense Organics culture, only five staff members knew of the bars development. When the beans were finally spilled in late August 2016, at least one staff member looked visibly relieved. This covert operation — or should we say 'couverture' operation — had been carried out successfully.

As you can see in the photos Marion was completely stunned as she opened the package.  Jim was also quite overcome by the gesture from the staff. "It was a great surprise," he says. "I'm not usually lost for words - but I was on this occasion."

Marion loves the packaging “To me, the birds symbolise helping people reach the sky,” she says. “I hope that’s what Commonsense is doing.”

Our 25th birthday bar can be purchased at a Commonsense Organics store near you or on our online store. To keep up with our birthday news, specials and giveaways, connect with us on Facebook, Instagram or via our monthly e-newsletter. 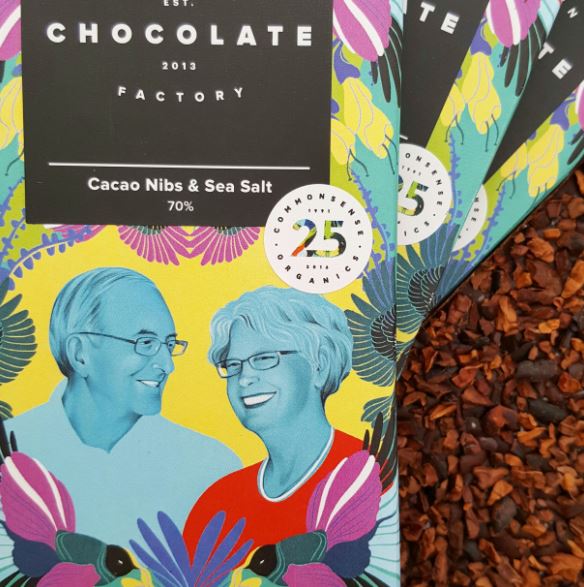